Perhaps the first serious study of Diffusion-Limited Aggregation was made by T.A. Witten and L. M. Sander and published by them in 1981. As the name suggests, the model describes random aggregation, the formation of a number of things into a cluster. This model is amongst other used to describe the diffusion and aggregation of copper ions in an electrolytic solution onto electrodes, as seen in figure 1. 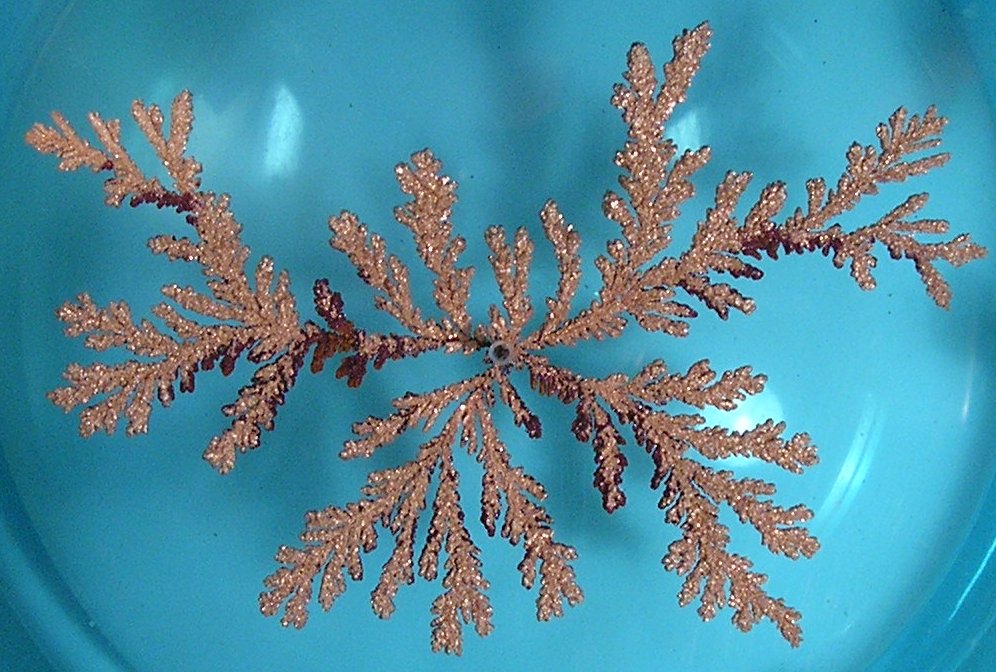 Witten and Sander describes their model in the following way [1]:
Our model is a variant of the Eden model whose initial state is a seed particle at the origin of a lattice. A second particle is added at some random site at large distance from the origin. This particle walks randomly until it visits a site adjacent to the seed. Then the walking particle becomes part of the cluster. Another particle is now introduced at a random distant point, and it walks randomly until it joins the cluster, and so forth. If a particle touches the boundaries of the lattice in its random walk it is removed and another introduced.

Paul Bourke [2] has a more colorful description, involving a city square surrounded by taverns:
Drunks leave the taverns and stagger randomly around the square until they finally trip over one their insensate companions at which time, lulled by the sounds of peaceful snoring, they lie down and fall asleep. The tendril like structure is an aerial view of the sleeping crowd in the morning.

Density correlations within the model aggregates fall off with distance with a fractional power law and the radius of the aggregation has power-law behavior [1], which coincides with experiments (as the one showed in figure 1).

As always, we start by including libraries and setting common figure parameters.

Note that the particle theoretically can wander away and we should therefore do something with the particles that are out of range (either hitting the edge of the lattice or be outside a specified range). There are several ways to do this. One may for example implement periodic boundary conditions (a particle that hits the right of the lattice, or a specific range, emerges on the left, etc.), ignore steps that moves the particles outside the range, or ignore the particle and introduce a new one. These will have about the same visual results [2]. We will be implementing the latter.

In the original model, the particles are said to be introduced at a distant point. To lower the computational time, we will be introducing the particles randomly distibuted on a circle that has a radius a bit larger than the maximum radius of the cluster.

One last remark: Scripting languages, such as Python, are quite slow compared to compiled languages such as Fortran and C/C++. Many of the functions in NumPy and SciPy calls compiled modules (see e.g. our guide on F2PY). The DLA model is very computational demanding, and therefore want to make use of these compiled modules. In the function below, we are using NumPy functions to compute a chunck of 200 steps at the time, thus lowering the computational time considerable, but the code may be a bit complex. In the case when the stickiness is less than one, we proceed by computing single steps.

Let us start by performing the simulation with, say 10000 particles and a single point as seed, for different stickiness. We also want to crop (remember that the lattice should be much larger than the radius of the cluster) and plot the results.

On the left image one can clearly see that new particles often stick to the cluster on the periphery. Its structure is easily seen on the right image. With a lower sticking probability the radius is decreased. That is, the structure becomes more compact, and the 'arms' more 'hairy'. As we will see, lower stickiness gives a lower fractal dimension $D$.

It is quite similar to figure 1, and the result in the article!

In many ways these clusters resemble so-called fractals, a mathematical set that exhibits a repeating pattern displayed at every scale [3]. One example of a fractal is shown in figure 2 below. This fractal is actually made using a quite simple method called iterated function systems (IFSs) with only a few input parameters [4]. By changing these parameters one can create many famous and artistic fractals.

By looking at the figure, can you convince yourself that fractals are found in nature? Some phenomena known to have fractal features include river networks, mountain ranges, lightning bolts, trees, mountain goat horns, algae, geometrical optics, animal coloration patterns, crystals and DNA! [3]

Note how one branch in figure 2 branches out into many smaller branches. Each of these in turn resembles the parent branch. This is also the case for our DLA clusters!

Fractals have a finite area, but an infinite perimeter. Consider our DLA clusters: Using a large measuring stick, we would not reach between the branches, but using a small measuring stick we would. In this manner, fractals cannot be described by the means of usual Euclidian dimensions, they have in general a non-integer fractal dimension $D$. This tells ut something about how dense the fractal is. Theoretically, the fractal dimension of a DLA cluster is $D \approx 1.71$. However, this is only true when the particles are not confined to a lattice.

Assume that a $d$-dimensional fractal is covered by a set of $d$-dimentional shapes (e.g. spheres or boxes in two dimensions) of linear size $\epsilon$ (an $L\times L$ square will have $\epsilon\propto L$, and we may choose $\epsilon = L$. For a sphere, we may for example choose $\epsilon$ to be the radius or the diameter of the sphere, or even the circumference! It is the scaling that is important). Then, the number of such shapes will scale as $$N \sim \epsilon^{-d}$$ [6]. In Euclidean space, $D$ is always an integer. This equation can be written as $$D \equiv -\frac{\log N(\epsilon)}{\log \epsilon}.$$

There are several ways to estimate the fractal dimension of our discrete DLA cluster. Witten and Sander [1] used the density correlation function to analyze the density. They found that $\rho = -0.34$, which in turn can be shown that corresponds to a fractal dimension of $D=1.66$. In this notebook we will rather use the more intuitive box counting algorithm. Note that this is no exact science: we will always expect $D$ less that the theoretical $1.71$, and maybe even lower than $1.66$!

We will now approximate the fractal dimension using the box counting algorithm. The idea is quite simple: We choose a box of size $\epsilon$, cover the cluster in these boxes and count how many of these boxes contains at least one particle. Then we check how the the number of boxes $N$ scales with the size $\epsilon$. This approximates the box counting dimension $$D \equiv \lim_{\epsilon \to 0}\frac{\log N(\epsilon)}{\log (1/\epsilon)}.$$ Note again that $\epsilon$ is scaled as the box, and is not necessarily equal to the length of the size of the boxes!

Now we simply call the functions above for one of our clusters, perform regression and plot the result!

Play around with different seeds!¶