The problem of RNA sequencing is to figure out how much and what type of RNA is present in a genome at a given moment in time. It has many applications including genome annotation, comprehensive identification of fusions in cancer, discovery of novel isoforms of genes, and genome sequence assembly [1][2].

For our purposes, we'll formulate the problem as follows: given a set of short reads that are sampled from a set of larger genes, how can we find the relative abundance of each gene? That is, given just the short reads, how do we know how frequently each original gene occurs? This process is depicted in Figure 1. (Aside: in the actual paper, these "genes" are actually "transcripts," but that's not relevant for us.) 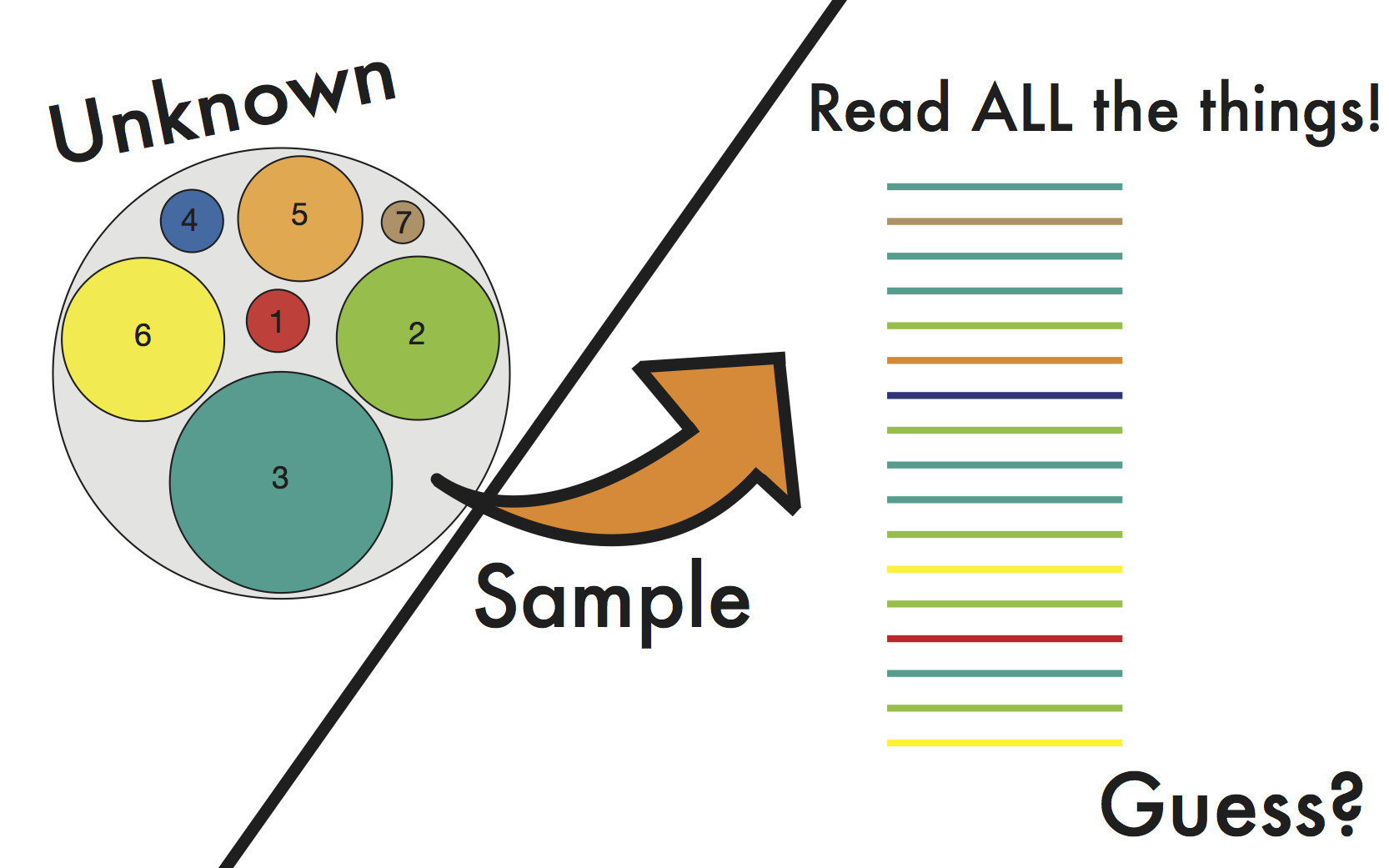 Figure 1: We want to use the reads to guess the underlying proportion.
¶

It turns out we can use some methods we learned in class (MLE & EM) to solve this problem -- let's try it out.

To make life easier, we're first going to assume no read is ambiguous. That is -- given a read, we can immediately tell which gene it came from. (In practice, this means we would have to know the chart mapping each color to a gene, as in Figure 1.)

Your solution should take both the gene lengths and the read lengths into consideration. Denote the probability of seeing a specific gene as $\rho_{t_i}$.

Hint: how many possible starting positions exist for $X_i$?

Hint: you might just be able to make an "educated guess" from your answer above.

Life gets harder when you allow for ambiguous reads. Going back to the figure above, we can imagine a case where we don't know which color a read belongs to, but we have a rough idea of the possible colors it could have been. See the modified figure below. 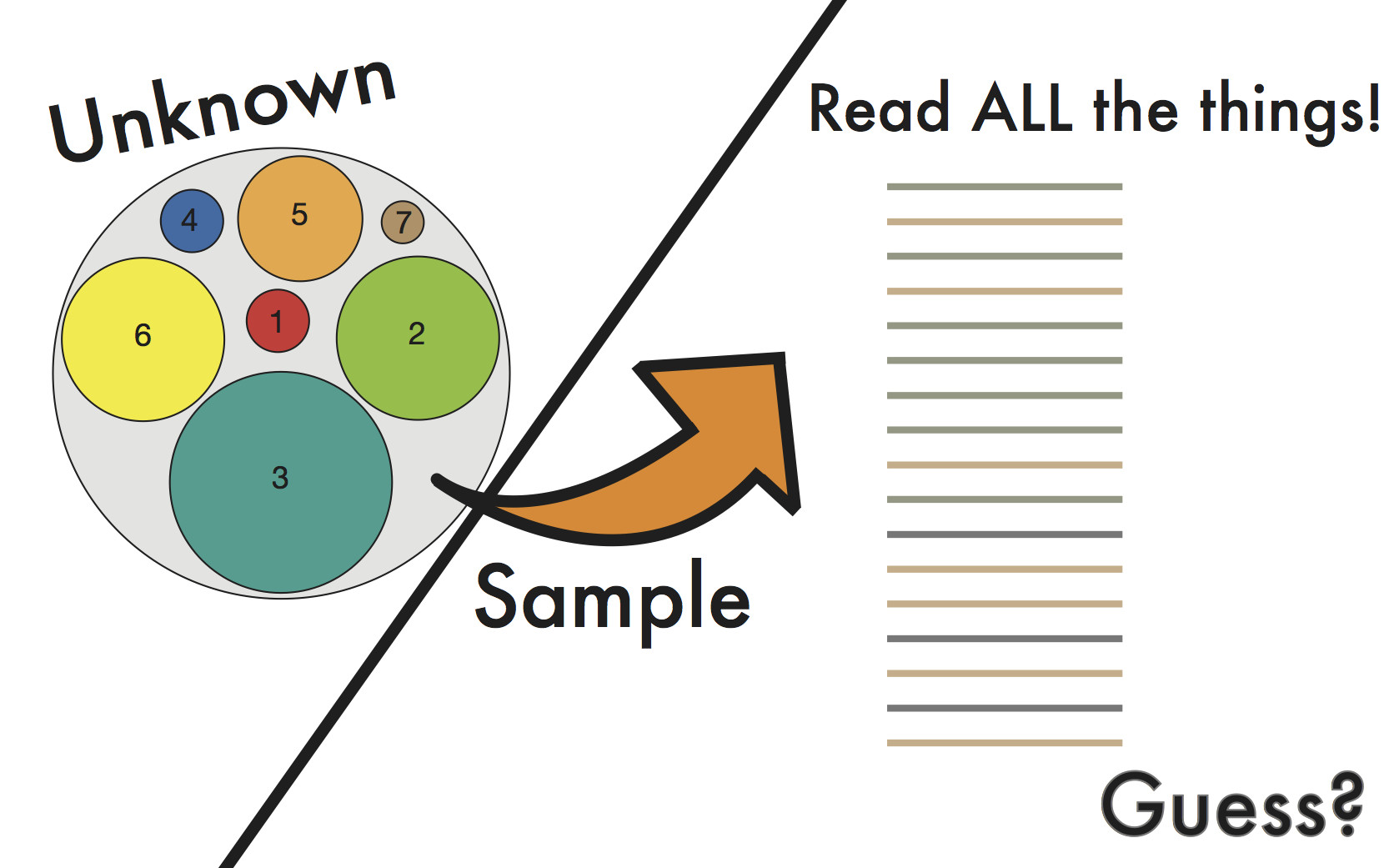 In this portion, we'll consider a general problem where a read is aligned with possibly more than one gene.

As a motivating example, let's assume we have $3$ genes and $5$ reads aligned as follows:

Figure 3: Each read is a subset of some gene, and it can be compatible with multiple genes.
¶

2a. Find the compatibility matrix $A$ for the above figure.¶

2b. Given an arbitrary compatibility matrix, write an expression to find the likelihood function for $\rho$.¶

You'll have to tweak your solution to the last portion by carefully considering how you can represent $P(X_i|\rho)$ given the compatibility matrix $A$.

In general, it is not easy to find the exact maximum likelihood estimator of $\rho$ if ambiguous reads exist. Instead, we can rely on iterative methods that we hope will converge to the true value. One way to go about this is via expectation maximization (EM), as you have seen in class.

To recap, here is a short tutorial that does a wonderful job of explaining all that you need to know about EM [3].

For our purposes, here is an EM algorithm that can be used. You'll be implementing it shortly, so read it carefully and understand why it works.

The following figure is a visual representation of the algorithm (Ref: p17 Pachter 2011) [1]. Figure 4: Visualization of the EM algorithm we will use.
¶

This is a lot to digest at once, so let's only look at the first step to begin with.

There are three possible genes to analyze (red, green, blue). There are five reads (a,b,c,d,e) that align with different genes. Initially, you assume a uniform prior.

For example, the abundance of red after the first M step is estimated by

3a. Explain the above EM algorithm in your own words. Will it always find the MLE for $\rho$?¶

3b. Implement the above EM algorithm. Run it with the given set of reads & genes. What is your estimated $\rho$?¶

Let's begin by with a toy example. We'll start by making the relevant imports...

In the code below, run the EM algorithm for 100 iterations and report your estimated distribution of $\rho$.

3c. Run the same EM algorithm on our bigger dataset.¶

Let's try running the same algorithm on much more data. Here we have a dataset of 150 transcripts of length varying from 4 to 19. We've gathered 10000 reads from exactly 5 of them -- can you recover which 5 transcripts we gathered the reads from?

Take a minute to appreciate what you've accomplished throughout the semester. This class wasn't easy, but hopefully you've learned a lot! Come see us if you'd like some help figuring out where to go from here.