To begin the lab, we explore random graphs, introduced by Erdős and Rényi. -- $G(n,p)$ has $n$ nodes and probability $p$ of an edge between each node.

You will need to install NetworkX in order to complete this lab. If you have difficulty installing it, you can follow a StackOverflow thread available here. Many of you may already have NetworkX because it comes default with the Anaconda installation of iPython.

We provide the following basic imports as well as a function written to draw graphs for you. The structure of a graph object is a collection of edges, in (node1, node2) form. You should know how to use draw_graph, but you don't really need to know how it works. Play around with it and look at those pretty graphs :)

Lets create a function that returns all the nodes that can be reached from a certain starting point given the representation of a graph above.

1a. Fill out the following method to find the set of connected components from a starting node on a graph.¶

1b. Fill out the following method that takes and returns all the connected components of the graph.¶

You may want to use the function you wrote above.

Next, we want to create a function that, given the number of nodes in a graph, will randomly generate edges between nodes. That is, we want to construct a random graph following the Erdős–Rényi model.

1c. Fill out the following function to create an Erdős–Rényi random graph $G(n,p)$.¶

Make sure you can see all nodes from 1 to 10 in the graph below -- if not, check your code!

Now let's examine some of the qualitative properties of a random graph developed in the original Erdős & Rényi paper.

(You don't need to code anything for this question).

Let's check a visualization of the last graph we generated:

We can see this largest component visually:

Transition 3: If $np → c > 1$, where $c$ is a constant, then a graph in $\operatorname{G}(n,p)$ will almost surely have a unique giant component containing a positive fraction of the vertices. No other component will contain more than $\operatorname{O}(\log(n))$ vertices.¶

We'll increase the number of nodes by a factor of 10 here so we can see this more clearly. Pay attention to the precipitous decline from the size of the largest connected component to that of all the rest.

Isn't it neat that you can rigorously formalize this kind of qualitative behavior of a graph, and then clearly see these transitions in simulation?

So far we've discussed the Erdős–Rényi model of a random graph $G(n,p)$. There are extensions that are better, more realistic models in many situations.

In this section, we will explore communities such as the following: 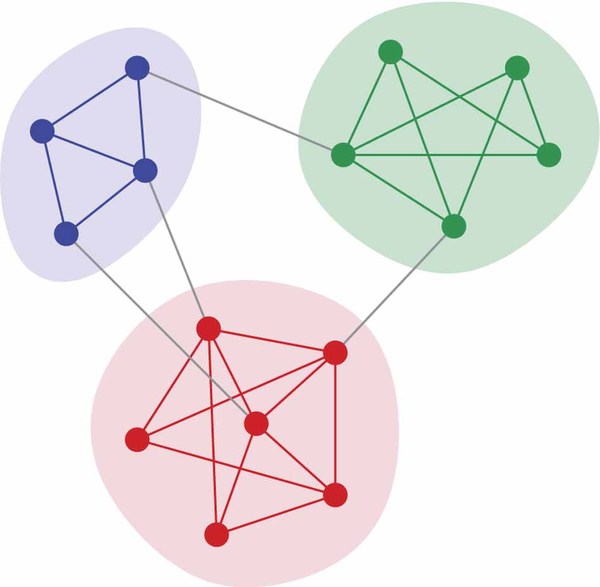 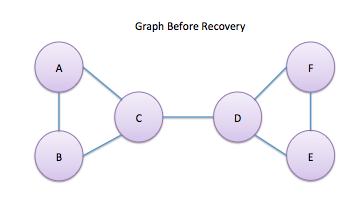 Our goal will be to recover the original communities. For this example, the result would look something like: 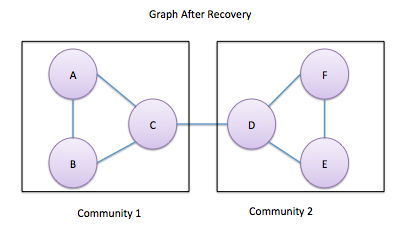 Let's begin by defining a function to generate graphs according to the stochastic block model.

3a. Fill out the following function to create a graph $G(n,p,q)$ according to the SBM.¶

We will be using this assumption for later questions in this lab, when we try to recover the two communities.

Let's try testing this out with an example graph -- check that it looks right!

How did we determine the most likely assignment of nodes to communities?

An intuitive approach is to find the min-bisection -- the split of $G$ into 2 groups each of size $\frac{n}{2}$ that has the minimum total edge weight across the partition.

In this week's homework you should prove that the likelihood is maximized by minimizing the number of edges across the two partitions.

3b. Given a graph $G(n,p,q)$, write a function to find the maximum likelihood estimate of the two communities.¶

Here's a quick test for your MLE function -- check that the resulting partitions look okay!

We can therefore test whether or not our MLE method accurately recovers these two communities from randomly generated graphs that we generate. In this section we will simulate the probability of exact recovery using MLE.

3c. Write a function to simulate the probability of exact recovery through MLE given $n,p,q$.¶

Here's a few examples to test your simulation:

It turns out that there is a threshold on $(p,q,n)$ for a phase transition which determines whether or not the communities can be recovered using MLE.

This part of the lab is meant to be open-ended. You should use the code you've already written to help arrive at an expression for threshold in the form

After this threshold, can almost recover the original communities in the SBM.

We will grade this portion leniently and based on the amount of effort put in.

Congratulations! You've reached the end of the lab.

For those who are interested, with the solutions we will release an (optional) lab as reading that guides you through the proof of this threshold in depth. It will also explore more efficient techniques (the MLE technique is NP-hard) to solve the problem of exact recovery.