In last week's lab, we learned about source coding and then briefly touched upon the channel coding problem. We learned about the simplest and most intuitive code: repetition codes. This week you will explore implementing your own code for transmission of data!

To see why efficient coding techniques are important, consider an erasure channel in which each packet sent gets dropped with some probability $p$. If we wanted to convey a message, we could consider a feedback channel in which the receiver tells the sender which messages were received and the sender re-sends the dropped packets. This process can be repeated until the receiver gets all of the intended message. While this procedure is indeed optimal in all senses of the word, feedback is simply not possible in many circumstances. What can we do in this situation?

In this lab, we will be looking at a specific type of code that will apply your knowledge of random bipartite graphs (the balls and bins model).

The coding scheme we will work with in this lab will be a type of erasure code. Under the binary erasure channel (BEC) model, bits that are sent through a noisy channel either make it through unmodified or are tagged as "corrupt", in which case the recieved information is dropped in all further information processing steps. 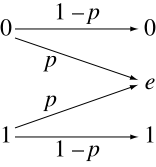 A code is considered optimal generally when all $n$ source symbols that need transmitting can be recovered from any $n$ encoded symbols. Think of it this way: You want to stream the new season of House of Cards from Netflix at midnight. But so do 1 million other people! Obviously the server loads are going to be high, so how can Netflix ensure that everyone watches without intermittent lags (which are frustrating and will lose them customers)? Well, one way is to increase the number of servers so that the load on any one server is decreased, but this costs a lot of money. Another important thing for them to consider is in the transmission process. When users are downloading the movie, Netflix servers don't want to have too much overhead to figure out which users need which bits of the video to get smooth playback. If they use near-optimal codes to encode and constantly send out the same random chunks of the video's data to all users, then they can be sure that users get what they need in only a little more than $n$ transmissions no matter what parts of the show each individual user lost through their specific channel!

So what's the secret to this magic? It's a two step process of clever encoding and decoding:

Now what's left for you to do? Well, remember that number $d$? It needs to be picked according to some distribution, and which distribution is the million dollar question!

As you might be able to tell, by choosing a good degree distribution for $d$, even when random incoming packets were lost (not shown), you were still able to recover all $5$ symbols only from $5$ received packets, despite the sender not knowing what packets you lost through the BEC.

A packet consists of...

data: The 'XOR'ed data (we will just add the bits in this lab for simplicity)¶

You can initiate an encoder with a string! Then, generate_packet() will return a randomly encoded packet.

Channel class takes a packet and erase it with probability eps.

You can initiate a decoder with the total number of chunks. Then, add_packet() will add a received packet to the decoder.

b. Using the 'single' degree distribution defined in the Transmitter class, send the raccoon over a channel with erasure probability 0.2. How many packets did you need to send? Display the data you receive every $100$ packets in addition to the data you receive at the end.

You may find the following function useful:

b ii. Looking at the graph, we see that it gets harder and harder to find the rest as we decode more and more chunks. Does this remind you of a well known theoretical problem?

Hint: Try out some small examples!

c. Using the 'double' degree distribution defined in the Transmitter class, send the raccoon over a channel with erasure probability 0.2. What happens?

Alice has just finished eating dinner, and with her EE 126 homework completed early for once, she plans to sit down for a movie night (she wants to make use of the 30-day free trial of Netflix!). While Alice is surfing Netflix she decides she wants to stream Interstellar. Alice's laptop drops packets with $p=0.25$. You, the Chief Technology Officer of Netflix, know that given the heavy workload of EE 126, this may be your only chance to convert this freeloading customer into a permanent one, but to do so you're going to have to make sure her viewing experience is perfect.

If you place in the top 3 in the class you will be awarded bonus points and full credit for the homework, as well as get to present your strategy to the entire course staff!

Besides the top 3 submissions:

Everyone who scores above 3 points will receive bonus credit that is proportional to their score!¶

Answer the following in 1-2 paragraphs (this should be answered individually):