Your best friend Ben Bitdiddle is convinced he's got a great new start up idea that's going to change the world. He's encouraging you to drop out and start the new company Bitdiddlers, Inc. with him. Before joining his start up, you'll want to do some analysis of your own to make sure his ideas are sound.

Bitdiddlers, Inc. will be a company in cloud data storage, which is already a pretty crowded field (Dropbox, Box, Google, Microsoft, Amazon, etc.), so you are understandably skeptical. However, there is one wrinkle to Ben's business model which he claims will help lower costs and #disrupt the current cloud storage model.

One thing that drives up the cost for cloud storage companies is ensuring that customer data is not lost. You never hear about Dropbox losing your presentation, or Facebook losing your photos from that bachelor party (even though you may want them to), or really any instances of customer data loss associated with cloud storage services. This is because storage companies incur an enormous overhead of replicating customer data many, many times over in order to ensure an extremeley low probability of data loss.

Ben Bitdiddle has decided that this expectation of 100% data integrity is increasingly unreasonable as humanity transitions deeper into a digital era. Digital goods, not unlike physical goods, are prone to permanent loss. Thus, Ben has taken inspiration from insurance companies, which help mitigate the pain of financial loss usually resulting from lost earning potential, goods, crops, shelter, etc.. Rather than promise 100% data integrity, which drives up costs and is inevitably a promise that cloud storage companies will be forced to break, Ben proposes that Bitdiddlers, Inc. will break ground in the new frontier of Cloud Data Insurance. 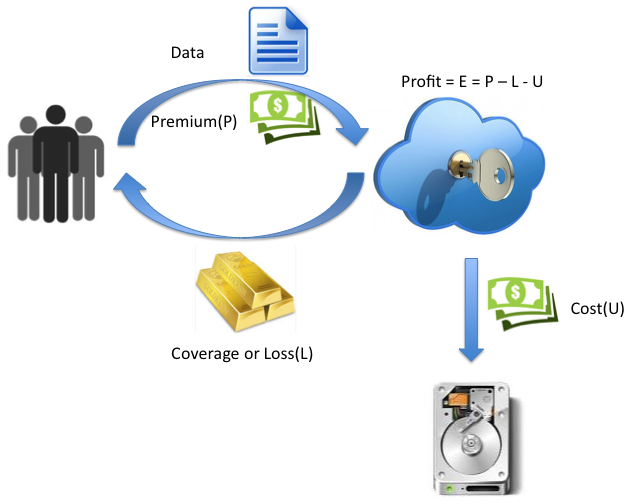 The basic premise of insurance is that customers pay a premium $p$ in order to insure their goods of value $v$ (in this instance, goods = data). In most cases, these goods remain unharmed (data remains secure), so the insurer happily pockets this premium from customers. In a small subset of cases, customer goods are damaged or lost (data is corrupted) and insurers must pay the customer the value $v$ of the goods that were lost. In order for the business to be profitable over the course of a year, the sum over all customer premiums must be larger than the costs of paying customers for lost goods plus the costs of operation.

Let's formalize this idea in terms of the problem at hand. We will make several simplifying assumptions in order to get a cursory look at the problem, rather than explore all of its intricate complexities. The purpose will be to make a back-of-the-hand evaluation of the business. In order to truly evaluate the opportunity, the model would have to be thoroughly refined, but the skeleton given is not a bad place to start.

We first define the following variables.

$P$: total annual premium = sum of all premiums charged to all customers per year

$U$: total expenses incurred in one year

Then, the following equation holds.

You will replicate each customer's data $r$ times, with each copy to be stored on a different disk to protect against failures. Costs will increase as $r$ increases, but the number of people who end up using their coverage will decrease (because data will be less likely to fail). You will see in this lab that $r$ is a business model parameter that you will tune.

For simplicity, we assume the following:

Let us assume an exceedingly simple model for data loss. Let us say that each disk has an I.I.D probability of failure of $p = 0.01$ on each day. At the end of each day, all disks that have failed are replaced. All content on those failed disks is replaced by a replica of that content.

Suppose you have a file on $r$ disks. If one disk with your file fails on the first day, one of the $r-1$ replicas of the file will be used to restore the file on a replacement disk for the failed disk. You will lose your file if all $r$ disks fail on any given day.

a. Find the probability of losing a file within a year if the file is stored in $r$ different disks. Each disk fails with probability $p = .01$ on each day, and all data on all disks is restored at the end of each day if possible (i.e. at least one disk has not failed).

c. Write a script to simulate the scenario described in part (a) for the same $r$ values at part (b). One trial is a simulation of one full year of disk failures. For each value of $r$, run 1000 trials to approximately determine the probability of losing a file in one year. Do your simulated results match what you expected based on analysis? Plot both the analytic probability and simulated probability on the same graph.

a. What is $\mathbb{E}[X]$, the expected number of customers who will lose their file per year? Remember, there are $N$ total customers.

b. What is your expected profit per customer, or $\frac{\mathbb{E}[E]}{N}$? Simplify as much as possible.

d. Given the results you see, what is the optimal number of times you should replicate customer data to maximize profit per customer?

Is an 'average'-based calculation enough? For example, which of the following two scenarios sounds better to you?

I bet most of you would prefer the first option to the second option. However, if you take a look at the expected profits of two options, you will find the following results.

This example illustrates that one should consider more than just the average profit when designing a policy. One thing you definitely should consider is the probability of bankruptcy. Let us model bankruptcy as the event where you lose money in your first year of operation and are forced to shut your business down. While this measure obviously isn't perfect (Twitter still doesn't turn a profit), it's not a bad indicator of failure for an insurance company, which are expected to turn a profit relatively early on.

a. What is the probability of your company becoming bankrupt as a function of $r$? You go bankrupt if $E < 0$ at the end of the year. Express your answer in the form of $P(X > \text{something})$.

Later in the course, we will study bounding and dealing with expressions like $P(X > \text{someting})$ in more detail. For now, we will just outline three probabilistic inequalities superficially and employ them here. The important thing to keep in mind with all three of these is that they allow us to analyze statements like $P(X > \text{someting})$.

i. Use Markov's inequality to put an upper bound of the probability of bankruptcy. Use the fact that $X$ must be an integer to tighten the bound slightly.

iii. Do the same using the Chernoff bound.

In the upcoming weeks of the course, we'll look at bounding probabilities of this nature, at which point we'll be able to do more to analyze our probability of going bankrupt. Wrestling with them and visualizing them before diving into the theory will give you a better feel and intuition for what these bounds can be used for and how good each one can be. We encourage you to play around with them! For now, we can be happy with the understanding above, which is esentially saying we can afford to lose one file for every \$10,000 ($V$) in revenue we generate.

Where do we go from here?¶

We made several assumptions while building our model to simplify the analysis and fixed several parameters that need not have been fixed. Nevertheless, we ended up with an optimal number of replications $r$ which is very similar to industry standard. Thus, it is unlikely that this business would succeed if you used the parameters specified. The next step in analysis would be to try to increase premiums or decrease insurance payouts to end up with a more viable business.

In case you are unconvinced that cloud data insurance is a very real start up idea and think that the course staff is just blowing smoke in order to ask probability questions, you can educate yourself by reading this article and looking at some of the startups and big players getting involved in the area.

By submitting this lab you are agreeing that if you start a company based on any of the ideas presented in this lab, the course staff is entitled to 10% equity in preferred shares. This agreement is in the nature of comic relief, and bears no legal value in any way whatsoever. If you are to start a company, however, please name it `Bitdiddlers, Inc.` to honor the course staff, who are all well reputed diddlers of the bits