Note: I presented this notebook as a tutorial during the PyData DC 2016 conference. To view the video of the presentation on YouTube, see here.

...and we might even learn a thing or two about Python along the way.

The Yelp Dataset is a dataset published by the business review service Yelp for academic research and educational purposes. I really like the Yelp dataset as a subject for machine learning and natural language processing demos, because it's big (but not so big that you need your own data center to process it), well-connected, and anyone can relate to it — it's largely about food, after all!

Note: If you'd like to execute this notebook interactively on your local machine, you'll need to download your own copy of the Yelp dataset. If you're reviewing a static copy of the notebook online, you can skip this step. Here's how to get the dataset:

That's it! You're ready to go.

The current iteration of the Yelp dataset (as of this demo) consists of the following data:

The data is provided in a handful of files in .json format. We'll be using the following files for our demo:

The files are text files (UTF-8) with one json object per line, each one corresponding to an individual data record. Let's take a look at a few examples.

The business records consist of key, value pairs containing information about the particular business. A few attributes we'll be interested in for this demo include:

The review records are stored in a similar manner — key, value pairs containing information about the reviews.

A few attributes of note on the review records:

The text attribute will be our focus today!

json is a handy file format for data interchange, but it's typically not the most usable for any sort of modeling work. Let's do a bit more data preparation to get our data in a more usable format. Our next code block will do the following:

Next, we will create a new file that contains only the text from reviews about restaurants, with one review per line in the file. 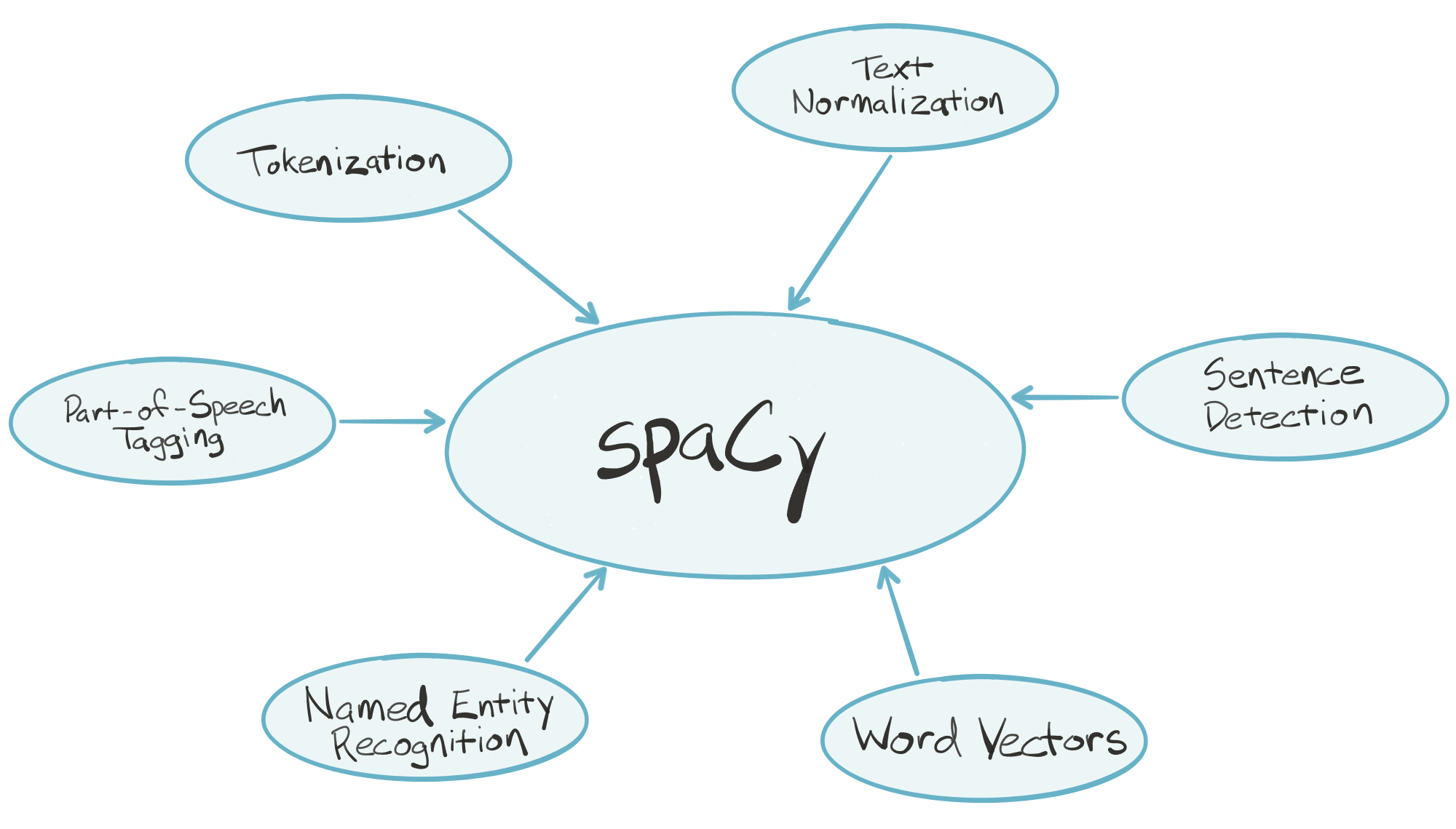 In the "batteries included" Python tradition, spaCy contains built-in data and models which you can use out-of-the-box for processing general-purpose English language text:

spaCy is written in optimized Cython, which means it's fast. According to a few independent sources, it's the fastest syntactic parser available in any language. Key pieces of the spaCy parsing pipeline are written in pure C, enabling efficient multithreading (i.e., spaCy can release the GIL).

Let's grab a sample review to play with.

Hand the review text to spaCy, and be prepared to wait...

Looks the same! What happened under the hood?

What about sentence detection and segmentation?

What about named entity detection?

What about part of speech tagging?

What about text normalization, like stemming/lemmatization and shape analysis?

What about token-level entity analysis?

What about a variety of other token-level attributes, such as the relative frequency of tokens, and whether or not a token matches any of these categories?

If the text you'd like to process is general-purpose English language text (i.e., not domain-specific, like medical literature), spaCy is ready to use out-of-the-box.

I think it will eventually become a core part of the Python data science ecosystem — it will do for natural language computing what other great libraries have done for numerical computing.

Phrase modeling is another approach to learning combinations of tokens that together represent meaningful multi-word concepts. We can develop phrase models by looping over the the words in our reviews and looking for words that co-occur (i.e., appear one after another) together much more frequently than you would expect them to by random chance. The formula our phrase models will use to determine whether two tokens $A$ and $B$ constitute a phrase is:

Once our phrase model has been trained on our corpus, we can apply it to new text. When our model encounters two tokens in new text that identifies as a phrase, it will merge the two into a single new token.

We turn to the indispensible gensim library to help us with phrase modeling — the Phrases class in particular.

As we're performing phrase modeling, we'll be doing some iterative data transformation at the same time. Our roadmap for data preparation includes:

We'll use this transformed data as the input for some higher-level modeling approaches in the following sections.

First, let's define a few helper functions that we'll use for text normalization. In particular, the lemmatized_sentence_corpus generator function will use spaCy to:

... and do so efficiently in parallel, thanks to spaCy's nlp.pipe() function.

Let's use the lemmatized_sentence_corpus generator to loop over the original review text, segmenting the reviews into individual sentences and normalizing the text. We'll write this data back out to a new file (unigram_sentences_all), with one normalized sentence per line. We'll use this data for learning our phrase models.

If your data is organized like our unigram_sentences_all file now is — a large text file with one document/sentence per line — gensim's LineSentence class provides a convenient iterator for working with other gensim components. It streams the documents/sentences from disk, so that you never have to hold the entire corpus in RAM at once. This allows you to scale your modeling pipeline up to potentially very large corpora.

Let's take a look at a few sample sentences in our new, transformed file.

Next, we'll learn a phrase model that will link individual words into two-word phrases. We'd expect words that together represent a specific concept, like "ice cream", to be linked together to form a new, single token: "ice_cream".

Now that we have a trained phrase model for word pairs, let's apply it to the review sentences data and explore the results.

Looks like the second-order phrase model was successful. We're now seeing three-word phrases, such as "vanilla_ice_cream" and "cinnamon_ice_cream".

In addition, we'll remove stopwords at this point. Stopwords are very common words, like a, the, and, and so on, that serve functional roles in natural language, but typically don't contribute to the overall meaning of text. Filtering stopwords is a common procedure that allows higher-level NLP modeling techniques to focus on the words that carry more semantic weight.

Finally, we'll write the transformed text out to a new file, with one review per line.

You can see that most of the grammatical structure has been scrubbed from the text — capitalization, articles/conjunctions, punctuation, spacing, etc. However, much of the general semantic meaning is still present. Also, multi-word concepts such as "friday_night" and "above_average" have been joined into single tokens, as expected. The review text is now ready for higher-level modeling.

Topic modeling is family of techniques that can be used to describe and summarize the documents in a corpus according to a set of latent "topics". For this demo, we'll be using Latent Dirichlet Allocation or LDA, a popular approach to topic modeling.

In many conventional NLP applications, documents are represented a mixture of the individual tokens (words and phrases) they contain. In other words, a document is represented as a vector of token counts. There are two layers in this model — documents and tokens — and the size or dimensionality of the document vectors is the number of tokens in the corpus vocabulary. This approach has a number of disadvantages:

LDA injects a third layer into this conceptual model. Documents are represented as a mixture of a pre-defined number of topics, and the topics are represented as a mixture of the individual tokens in the vocabulary. The number of topics is a model hyperparameter selected by the practitioner. LDA makes a prior assumption that the (document, topic) and (topic, token) mixtures follow Dirichlet probability distributions. This assumption encourages documents to consist mostly of a handful of topics, and topics to consist mostly of a modest set of the tokens. 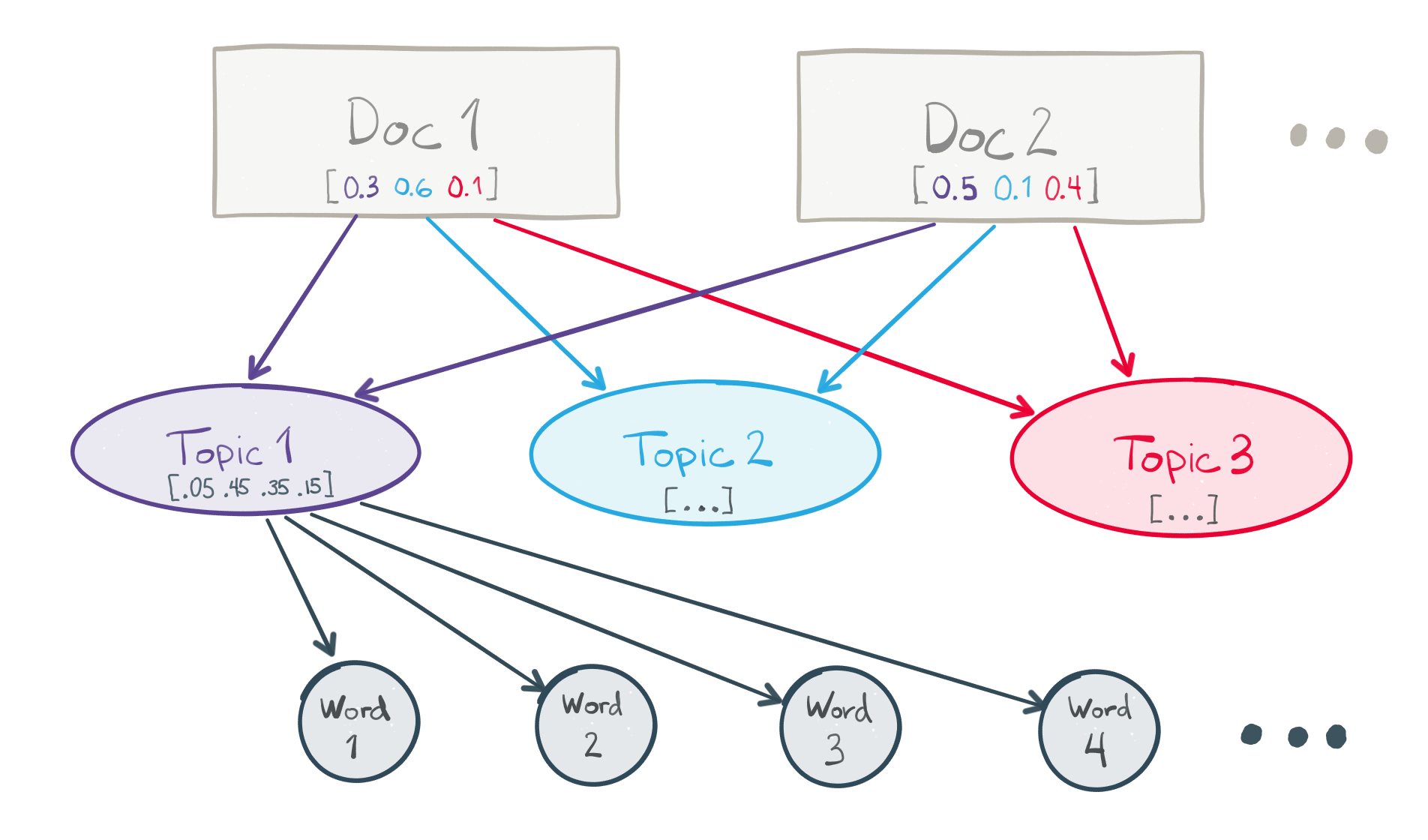 LDA is fully unsupervised. The topics are "discovered" automatically from the data by trying to maximize the likelihood of observing the documents in your corpus, given the modeling assumptions. They are expected to capture some latent structure and organization within the documents, and often have a meaningful human interpretation for people familiar with the subject material.

We'll again turn to gensim to assist with data preparation and modeling. In particular, gensim offers a high-performance parallelized implementation of LDA with its LdaMulticore class.

The first step to creating an LDA model is to learn the full vocabulary of the corpus to be modeled. We'll use gensim's Dictionary class for this.

Using the gensim Dictionary we learned to generate a bag-of-words representation for each review. The trigram_bow_generator function implements this. We'll save the resulting bag-of-words reviews as a matrix.

In the following code, "bag-of-words" is abbreviated as bow.

With the bag-of-words corpus, we're finally ready to learn our topic model from the reviews. We simply need to pass the bag-of-words matrix and Dictionary from our previous steps to LdaMulticore as inputs, along with the number of topics the model should learn. For this demo, we're asking for 50 topics.

Our topic model is now trained and ready to use! Since each topic is represented as a mixture of tokens, you can manually inspect which tokens have been grouped together into which topics to try to understand the patterns the model has discovered in the data.

The first topic has strong associations with words like taco, salsa, chip, burrito, and margarita, as well as a handful of more general words. You might call this the Mexican food topic!

It's possible to go through and inspect each topic in the same way, and try to assign a human-interpretable label that captures the essence of each one. I've given it a shot for all 50 topics below.

You can see that, along with mexican, there are a variety of topics related to different styles of food, such as thai, steak, sushi, pizza, and so on. In addition, there are topics that are more related to the overall restaurant experience, like ambience & seating, good service, waiting, and price.

Beyond these two categories, there are still some topics that are difficult to apply a meaningful human interpretation to, such as topic 30 and 43.

Manually reviewing the top terms for each topic is a helpful exercise, but to get a deeper understanding of the topics and how they relate to each other, we need to visualize the data — preferably in an interactive format. Fortunately, we have the fantastic pyLDAvis library to help with that!

pyLDAvis includes a one-line function to take topic models created with gensim and prepare their data for visualization.

pyLDAvis.display(...) displays the topic model visualization in-line in the notebook.