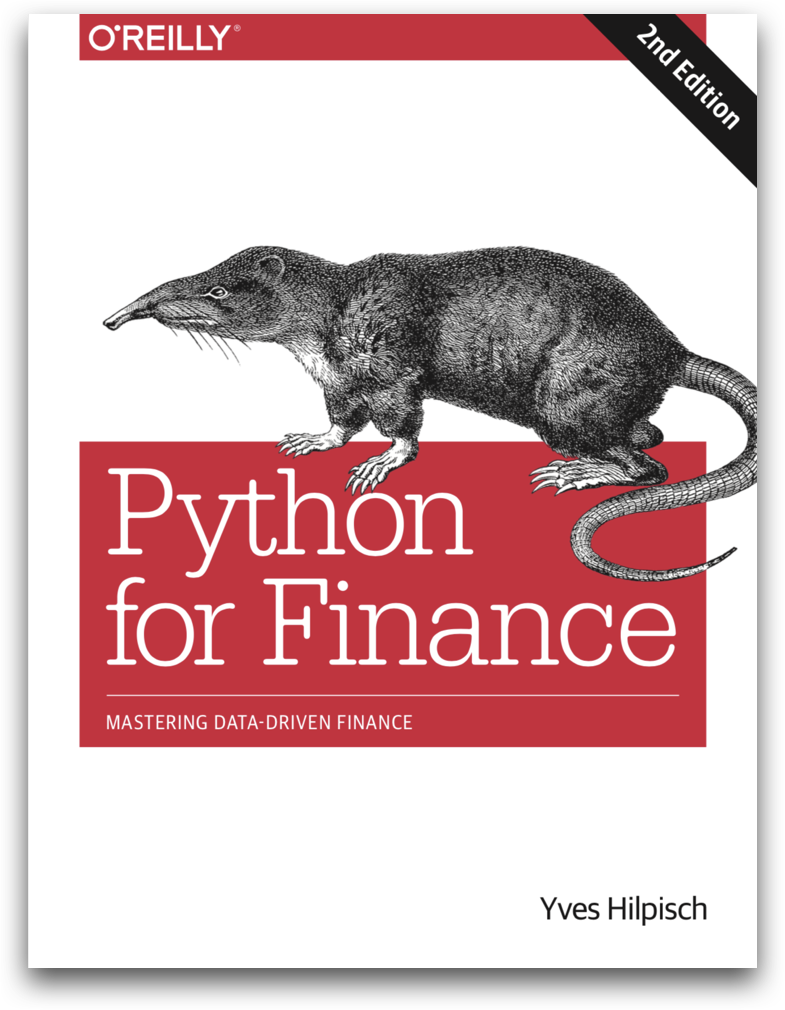 First we set the seed in order to always generate the same random numbers.

2.2) We can also generate randoom numbers from distributions

3.1.1) Consider, for example, the Black-Scholes-Merton setup for option pricing. In their setup, the level of a stock index $S_T$ at a future date $T$ given a level $S_0$ as of today is given according to:

3.1.2) Alternatively since we know that the equation in 3.1.1) represents a log-normal distribution, we can use the numpy's lognormal random generator by specifying location and scale parameters.

3.1.3) In order to conclude that the two simulations above are indeed the same, we can compute some statistics on the two distributions and compare them.

Below we have the Stochastic differential equation in Black-Scholes-Merton:

Also the figure below shows the first 10 simulated paths:

Using the dynamic simulation approach not only allows us to visualize paths as displayed in the figure above, but also to value options with American/Bermudan exercise or options whose payoff is path-dependent.

The payoff of a European call option on an index at maturity is given by $h(S_T)\equiv max\{S_T-K, 0\}$, where $S_T$ is the index level at maturity date $T$ and $K$ is the strike price. Given a risk-neutral measure for the relevant stochastic process (e.g., geometric Brownian motion), the price of such an option is given by the formula:

The equation below provides the respective Monte Carlo estimator for the European option, where $\tilde{S}_{T}^{i}$ is the $T$-th simulated index level at maturity.

Consider the following parameterization for the geometric Brownian motion and the valuation function gbm_mcs_stat(), taking as a parameter only the strike price. Here, only the index level at maturity is simulated. As a reference, consider the case with a strike price of $K = 105$:

Next, consider the dynamic simulation approach and allow for European put options in addition to the call option. The function gbm_mcs_dyna() implements the algorithm. The code also compares option price estimates for a call and a put stroke at the same level:

The question is how well these simulation-based valuation approaches perform relative to the benchmark value from the Black-Scholes-Merton valuation formula. To find out, the following code generates respective option values/estimates for a range of strike prices, using the analytical option pricing formula for European calls. First, we compare the results from the static simulation approach with precise analytical values:

The figure below shows the results. All valuation differences are smaller than 1% absolutely. There are both negative and positive value differences:

A similar picture emerges for the dynamic simulation and valuation approach, whose results are reported in the figure below. Again, all valuation differences are smaller than 1% absolutely, with both positive and negative deviations. As a general rule, the quality of the Monte Carlo estimator can be controlled for by adjusting the number of time intervals $M$ used and/or the number of paths $I$ simulated:

The valuation of American options is more involved compared to European options. In this case, an optimal stopping problem has to be solved to come up with a fair value of the option. The Equation below formulates the valuation of an American option as such a problem. The problem formulation is already based on a discrete time grid for use with numerical simulation. In a sense, it is therefore more correct to speak of an option value given Bermudan exercise. For the time interval converging to zero length, the value of the Bermudan option converges to the one of the American option.

The algorithm described in the following is called Least-Squares Monte Carlo (LSM) and is from the paper by Longstaff and Schwartz (2001). It can be shown that the value of an American (Bermudan) option at any given date $t$ is given as

Consider now that we have simulated $I$ paths of the index level over $M$ time intervals of equal size $\Delta t$.

Given a set of basis functions $b_d,d=1,\dots,D$, the continuation value is then given by the regression estimate $\hat{C}_{t,i}=\sum_{d=1}^{D}\alpha_{d,t}^{*}\cdot b_{d}(S_{t,i})$, where the optimal regression parameters $\alpha^*$ are the solution of the least-squares problem stated in the equation below:

The figure below shows that for the range of strikes chosen the early exercise premium can rise to up to 10%: