Transmittance Spectra for Planewave at Normal Incidence of a Binary Grating¶

In this example, we'll define a grating that is periodic in the $y$ direction with periodicity gp and has a rectangular profile of height gh and duty cycle gdc. The grating parameters are gh=0.5 μm, gdc=0.5, and gp=10 μm. There is a semi-infinite substrate of thickness dsub adjacent to the grating. The substrate and grating are glass with a refractive index of 1.5. The surrounding is air/vacuum. Perfectly matched layers (PML) of thickness dpml are used in the $\pm x$ boundaries.

We'll do our analysis first using an ideal quartz that ignores the dispersion of the material. Then we'll include the dispersion to detect any differences.

A pulsed planewave with $E_z$ polarization spanning wavelengths of 0.4 to 0.6 μm is normally incident on the grating from the glass substrate. The eigenmode monitor is placed in the air region. We will use mode decomposition to compute the transmittance — the ratio of the power in the $+x$ direction of the diffracted mode relative to that of the incident planewave — for the first ten diffraction orders.

We first need to simulate the empty, homogenous glass (fuzed quartz) with a constant refractive index.

Now, we'll run the simulation and record the fields.

Next, we'll simulate the actual grating.

Now we can compute the diffraction orders as a function of wavelength:

Note the use of the keyword parameter argument eig_parity=mp.ODD_Z+mp.EVEN_Y in the call to get_eigenmode_coefficients. This is important for specifying non-degenerate modes in MPB since the k_point is (0,0,0). ODD_Z is for modes with Ez polarization. EVEN_Y is necessary since each diffraction order which is based on a given kx consists of two modes: one going in the +y direction and the other in the -y direction. EVEN_Y forces MPB to compute only the +ky + -ky (cosine) mode. As a result, the total transmittance must be halved in this case to obtain the transmittance for the individual +ky or -ky mode. For ODD_Y, MPB will compute the +ky - -ky (sine) mode but this will have zero power because the source is even. If the $y$ parity is left out, MPB will return a random superposition of the cosine and sine modes. Alternatively, in this example an input planewave with Hz instead of Ez polarization can be used which requires eig_parity=mp.EVEN_Z+mp.ODD_Y as well as an odd mirror symmetry plane in y. Finally, note the use of add_flux instead of add_mode_monitor when using symmetries.

The diffraction spectrum is then plotted and shown in the figure below.

Finally, by investigating the transmittance of the zeroth order (at a wavelength of 0.5 μm) in the limit as the grating periodicity approaches zero, we can demonstrate the breakdown of the scalar theory in the wavelength-scale regime which can only be solved using a full-wave method. When the periodicity is much less than the wavelength (i.e., subwavelength), the transmittance can again be solved analytically using effective-medium theory involving a three-layer structure: a layer of the averaged ε (mean or harmonic mean depending on the polarization $E_z$ or $H_z$) sandwiched between the glass substrate and air. Results are shown in the following figure. 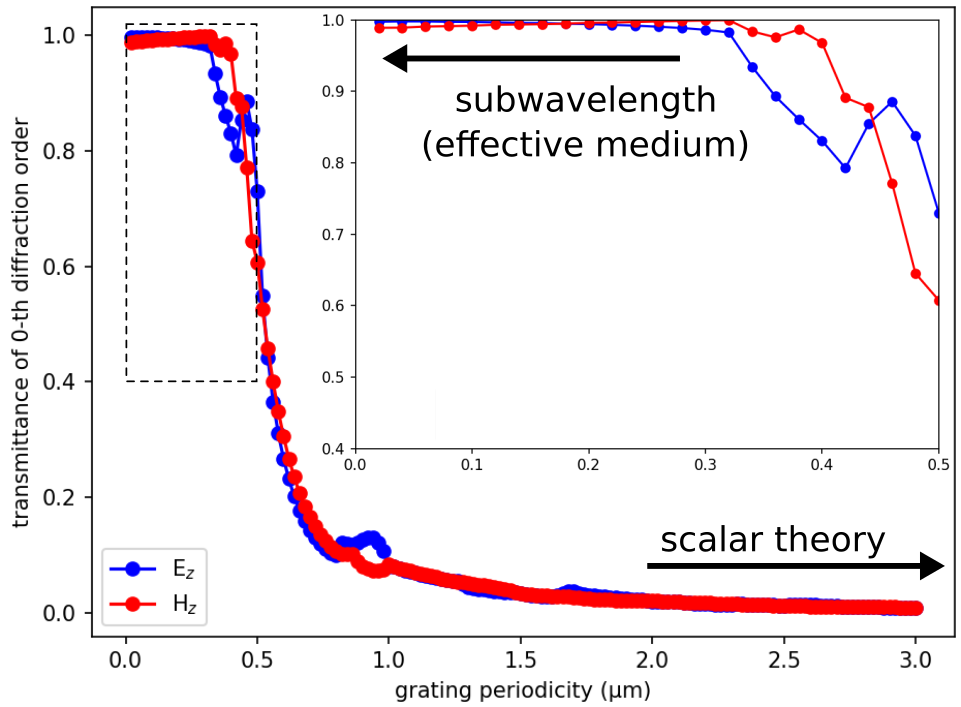 Starting around a grating periodicity of 1.0 μm, the transmittance is no longer zero and increases rapidly with decreasing periodicity. As shown in the inset, for periodicities less than 0.5 μm, the transmittance converges to its asymptotic limit determined by the effective-medium theory: 0.99744 for the $E_z$ and 0.99057 for the $H_z$ polarization. The weak polarization dependence is due to the low index contrast. The oscillations in the data are real and not an artifact of the discretization.

Since fuzed quartz isn't highly dispersive in this range, we don't see much of a difference between the two plots.